skip to main | skip to sidebar

We have been travelling through the Maritimes on our way home to Winnipeg. We are now in New Brunswick after spending time in PEI and Nova Scotia.

In Nova Scotia we spent a day driving up the coast from Lunenburg to Halifax. Lunenburg was very picturesque. We had a picnic lunch and saw Bluenose 2. We spent the night in Halifax and woke up to a foggy and misty morning. We strolled around downtown and saw the Public Gardens and Pier 21. Our tour guide at Pier 21, George Zwaagstra immigrated to Canada from the Netherlands in either 1951 or 1971 (Theo and I can't remember and are in disagreement). He landed in Halifax at Pier 21 and had some interesting stories to share.

We headed to PEI on September 3 taking the ferry from Caribou, NS to Wood Islands PEI. We spent two nights travelling along the Points East Coastal Drive. The highlight was Basin Head Beach and the Singing Sands. We didn't know what to expect from PEI. we were surprised to find so many sandy beaches and farms! Also, a lot of mosquitos! We both received plenty of bites and are not used to the itch after leaving in St. John's for so long!

Today we arrived in New Brunswick via the Confederation Bridge from PEI. We left Charlottetown bright and early and Theo May not have been fully awake because he failed to realize we were parked on a slope. He lifted off the cooler to load into the car and the luggage cart rolled down the hill with me chasing after it! Lucky it hit a curb rather than any parked cars.

We arrived at the Hopewell Rocks along the Bay of Fundy at 10 am this morning in time to see the high tide. The high tide today was 40.1 feet (the maximum high tide at Cape Hopewell is ~49 feet). We wandered around the park trails checking out the different sea stacks or flower pots are they are locally referred to. By 1 pm the tide was low enough to walk out on the ocean floor. It was insane to see how much the landscape had changed from high tide to low tide! Unfortunately we won't be able to share Theo's pictures until we can access our computer in Winnipeg.

All in all it has been a great trip so far! We plan to spend time exploring Fredericton before heading to Ottawa for a couple of days!

"That's it, back to Winnipeg!"

Cassandra and I have had a busy summer. We have had visitors almost every month and we decided it was time to move back west to the Great Plains of Canada. The moving truck picked up our stuff Friday morning and we said good bye to work and friends, it was sad to leave. We had an uncomfortable sleep on the floor then packed the car. We got a little stressed because we had more stuff than we thought. I had to go to the dump and value village one last time. We made it onto the Argentia ferry for our 16 hour boat ride and had a much more comfortable sleep in our cabin. Now we are in Nova Scotia and enjoying some of the sights with friends.

Our roof box blew open a bit on the way here but luckily we had a strap holding it down. Although it was probably too tight which let one of the latches loose to begin with. Nothing lost but we did change the strap orientation to hold the box closed in the other direction. We also stopped at the Alexander Graham Bell site in Baddeck. He was a very cool dude and did a lot more than help develop phones and teach the deaf. You can attribute hydrofoils and the first British flight to his name.

We are excited to be heading home but are going to enjoy the drive. We will be seeing many of you soon. 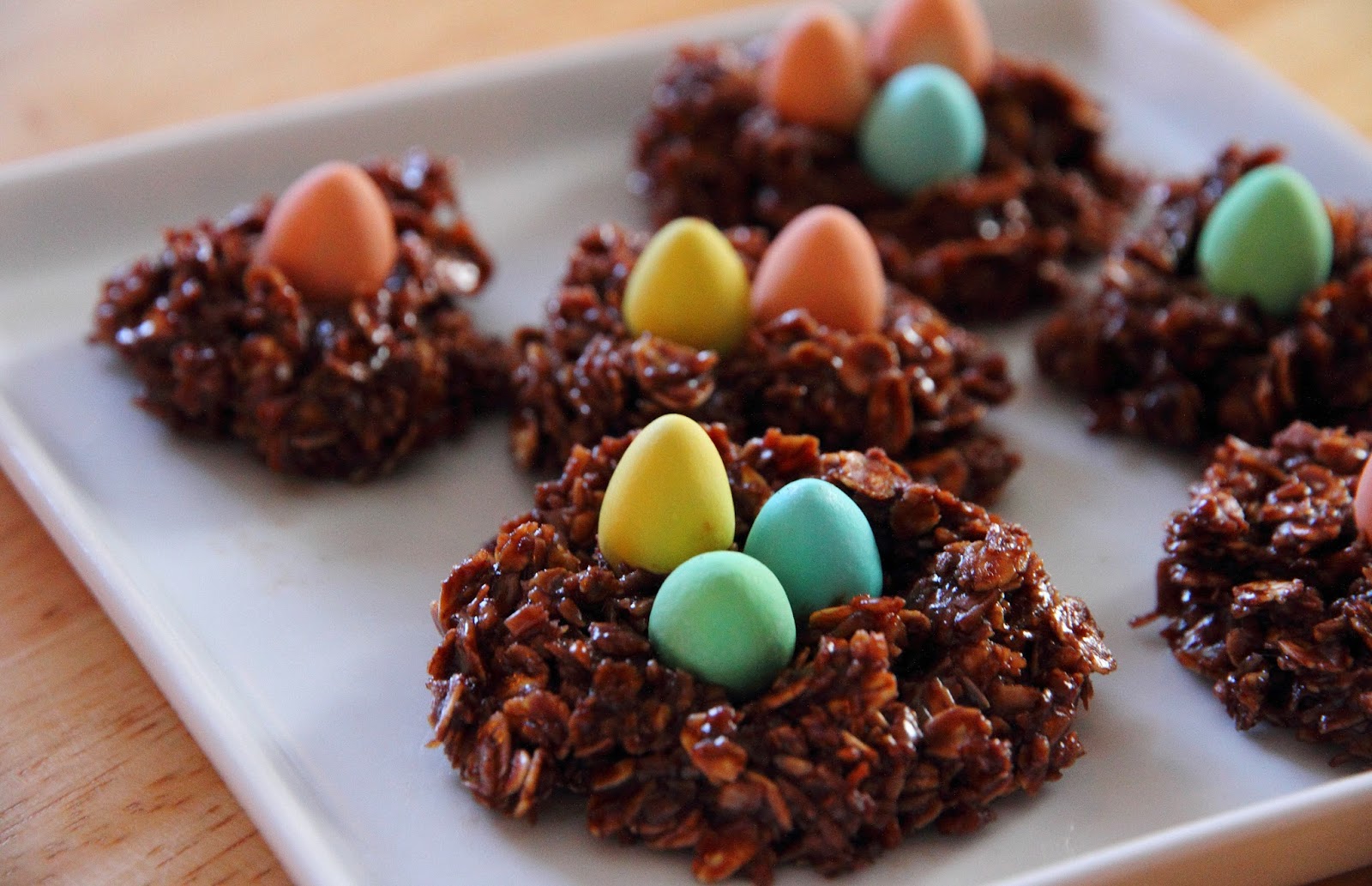 Winter is over!!! Or so I thought, until I saw a dusting of white over everything this morning. Luckily its sunny and all melted or melting.

Cassandra made some great no bake mini egg nest cookies. They taste as good as they look. Hopefully with this weather looking up I'll get around to taking more pictures and we'll enjoy the outdoors a little more.
Posted by Theo at 10:43 AM No comments: 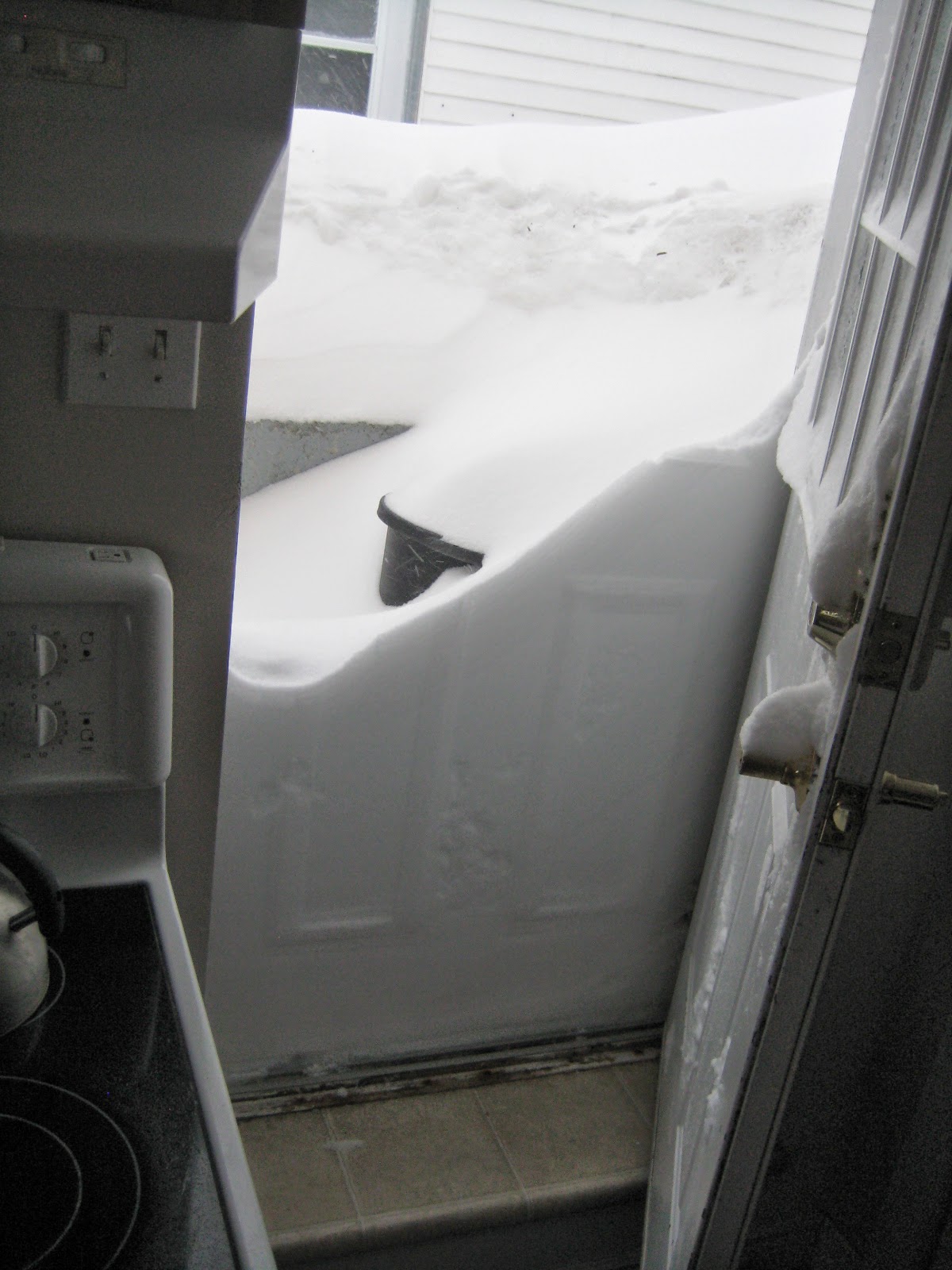 This is a joke right. The weather's way of saying April fools. I should just go to bed and it will all be gone. Too bad hospitals never get snow days. Another 10-20cm to fall today.
Posted by Theo at 5:11 AM No comments:

Here's Cassandra fighting with the snow bank. It keeps spitting the snow back at her because our yard is full and doesn't want any more snow.

I'm putting some pictures of the snow storm on my Flickr now.
Posted by Theo at 5:12 PM No comments: 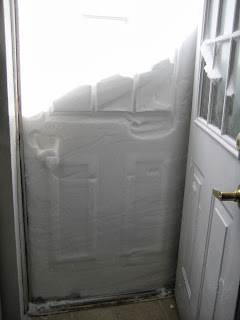 We woke up this morning to a bit of a surprise. I knew the snow would be bad but wasn't happy to see how much was in the doorway. I was ready to fall asleep and not wake up till the spring. Snow drifts aren't fun when you have a sunken in entry way. 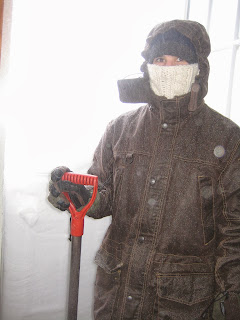 Dawning the appropriate gear we eventually clambered out of the house, closed the door and shovelled the snow. The wind was so bad it whipped snow into our faces like a bunch of tiny needles. Also all our windows of egress for our bedrooms were completely buried and Cassandra made me wade thigh deep in the snow to clear them out. It was much brighter when we got in but the power was still out. The power came back on for us around four but there are some people that will be with out power for a day or two still. Hydro workers from PEI have been asked to help apparently.

I'm pretty sure the doorway is filled in again by now. There isn't a lot of snow falling now but lots of wind. It's easy to get tired of the winters here. I hope everyone is keeping warm. I'll take some pictures of the street when things calm down a bit.
Posted by Theo at 6:55 PM No comments: 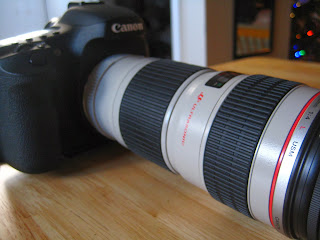 Yeah that is a 70-200mm L series f4 USM Canon lens. Cassandra and I did some end of year financial assessment. I didn't think I needed to go out and spend the cash for IS or f2.8 so I just got the base model which makes for a reasonable buy. I've already taken it out and am really happy with the results. The USM makes focusing so quick and quiet and the pictures are sharp. The lens is also much skinnier and lighter than I thought making it easier to carry around. I also got around to dropping off my 15-85mm lens to the only certified repair guy in the city. Henry's even sends their stuff there not under warranty. There is some grit under the manual focus ring that should be cleaned out. Turns out its a real simple clean for only 45 bucks, that makes me happy. Cassandra also makes me happy, even though she complains that she is in every one of my photos and that I stare at her more with a camera in front of my face than with my own eyes. Hopefully I make up for it with charm. 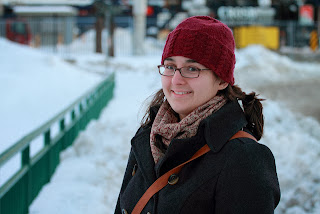 My Flickr page
Posted by Theo at 5:10 PM No comments: